Posted on November 28, 2011 by ultimatejapanworld 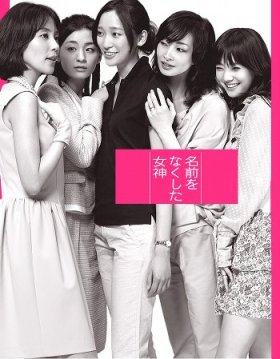 The story tells about these five different women form an union through sharing their anxieties about raising their children from a different background. The friendship of the five women turns  out to become jealousy and betrayal, due to the problem that their children are taking entrance exams for elementary school….. Anne plays the protagonist Yuko struggles to climb back from her overturned fallen state…… Ono plays a woman receiving “abuse” from her husband……. Kurashina plays a “yankee mama” who got pregnant as a teenager by a truck driver…….  Ryo plays a smart woman running her own online shop……. Kimura plays a reader model for a women’s magazine……..

“Namae o Nakushita Megami” centers around 28-year-old Yuko Akiyama (Anne Watanabe) who becomes a housewife after her laid-off from work. Prior to her unemployment, Yuko worked at a home builder company. With her husband Takumi Akiyama (Takeshi Tsuruno), the couple bought a new apartment. Now as full-time housewife Yuko meets a group of housewives at her son Kenta’s (Kanata Fujimoto) new elementary school. It is new to Yuko as housewives, Yuko learns the positives and negatives of their situations ………..

sends her daughter Ayaka (Seiran Kobayashi) to the same school as Yuko’s child did, since Reina’s elementary school days she has always attended prestigious schools.  From a young age, Reina only dated men from backgrounds, but became tired of that. During that time, she met her present husband. She currently works as a model for a female magazine. Other housewives envy her, but she became estranged from her husband shortly after their marriage. Her friends, who graduated from the same high school, all send their kids to the same school so that she can’t let her daughter fail the elementary exam.

a mother with a positive outlook even though she carries the weight of a troubled childhood. She grew up as a loner, while experiencing bullying at school. After the birth of her child Sow (Terumi Nagashima), Chihiro became estranged from her husband. Although there was no physical abuse, she was verbally abused by her husband.

gave birth to her daughter at the age of 18, before she married her current husband. After her father-in-law passed away, he left the couple with 10,000,000 yen. With that money and a loan, they bought a small studio apartment in a luxurious apartment. Mao is so excited that Reina lives in the same apartment complex. Also, she is happy her daughter Rara (Kanon Tani) is friends with Reina’s daughter. Mao wants her daughter Rara to take the elementary exam. She attends the school’s presentation but get shocked about the entry exam is hard even for herself….

runs an internet business  selling imported baby items. She is the only one of the housewives group who works. She has 2 children, one from her ex-husband and the other from her current husband. Her husband is model Kei (Keiji), who is 12 years younger than her. Although he treats the kids well as a friend not a father. Rikako becomes close to Yuko.